Loading SWF for the first time...
Adobe Flash is required to run this project in the browser. Enable Flash
Download Now

NO ADVENTURER IS EVER WITHOUT HIS HAT.

SHOW US SOME LOVE ON LUDUM DARE! 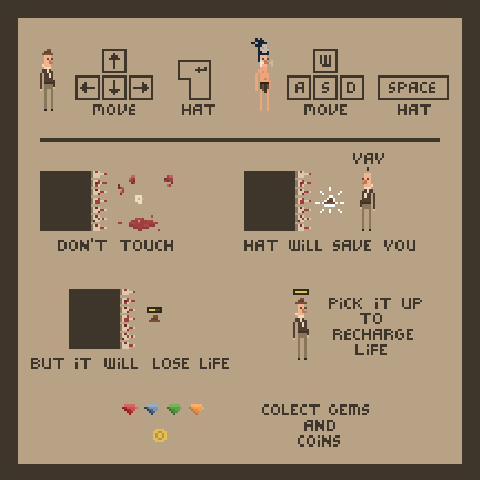 Steal treasure and halt giant walls of spikes with your trusty headwear.
But watch out! It may stop traps, but it won't last forever!
Make sure to plonk it back on your head so it stays in good nick.

Wait! What was that? Seems you're not alone.

Work together with your rival to build up your riches then stab them in the back.

To the victor, the spoils!

In the Indiana Jones films, his hat is always the object that seems to survive against the ridiculously impossible odds. We took the durability of the hat to it's extremes by making it an object that could be used to protect our adventurer against the dangers of the tomb. In these films, the hat always ends up back on the head of the hero, so for the mechanics we made it regenerate health as long as it returned to it's owner's head.

Sounds and & Death Song
Will Bedford

Enjoy and any feedback or suggestions are greatly appreciated!